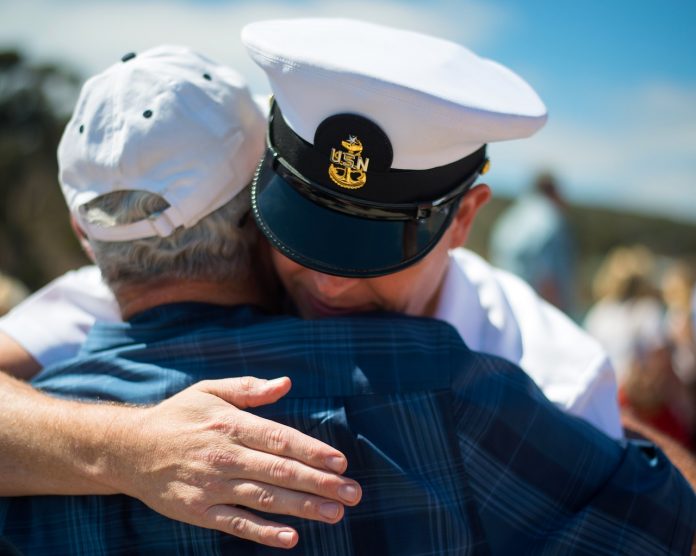 When I announced almost 35 years ago that I intended to enlist in the United States Navy I had several reactions. The most memorable of those were:

my brother’s words. I served in the Navy Submarine Force for 8 years, over 5 of them on SSN 686, the USS L. Mendel Rivers. For those years I learned the meaning of “Rivers Delivers” and worked with dedicated, knowledgeable, skilled colleagues who were, like myself, closet patriots.

I have found that most of my fellow veterans are not comfortable on days that over recognize our military service. To me, being overtly thanked and the center of attention feels crass, immodest and out of place for a submariner whose 8 year job was to avert attention rather than bask in it.

These days I rarely pull my imaginary “veteran” card. I say I am a veteran at Lowes. They give 10% off to veterans and I buy a lot of stuff at Lowes. I once used it at a shockingly expensive golf course in Michigan. It got me 50% off my green fees. One of my buddies grumbled, “…must be nice.”

My reply was, “Well, it was 8 years in the making…” Sometimes even closet patriots have to lay down a little smack.

Serving in the military has never, truly, been about choice. Yes, we no longer live, as my brother did, in the shadow of a draft. However, serving in the military is not just accepting a job. No other job has “death” listed as an employment duty. True, our public safety officials face death, but in the military, you can be called to die as a routine order. It is called combat.

The military is a calling to service that transcends most other professions of the modern era. The only thing I can think of that comes close is those who are called to the ministry. In fact, they are similar. Both professions are paid shocking low and are on call 24/7.

Serving in the military isn’t about job security, health care, family care, college financing, skill training, leadership development or retirement. There are far easier jobs that have those benefits in spades. Serving in the military is about the deeply engrained knowledge that freedom is aggressively opposed in the world, that the strong, if unchallenged, will prey on the weak, and that negligence leads to oppression.

My brother was right. Those who serve and have served in the military are truly closet patriots. They know, deep down, that their dedicated time to the defense of our nation is not now nor will it ever be about recognition. Like all who are genuine servants, veterans served out of love and duty. It is hard to truly capture that in a parade or speech.

So, on Veterans Day, go ahead and thank the veteran in your life. Just do it quietly. And fellow veterans, try and graciously accept that thanks along with your 10% discounts. It is alright to peek outside the closet and acknowledge our service. After all, closets are for storage, not patriots.

There are a variety of resources available to veterans locally. Check out the following websites:

Top Ten Things to Do: Trying Something New!

Mashed Potatoes for One (Written)