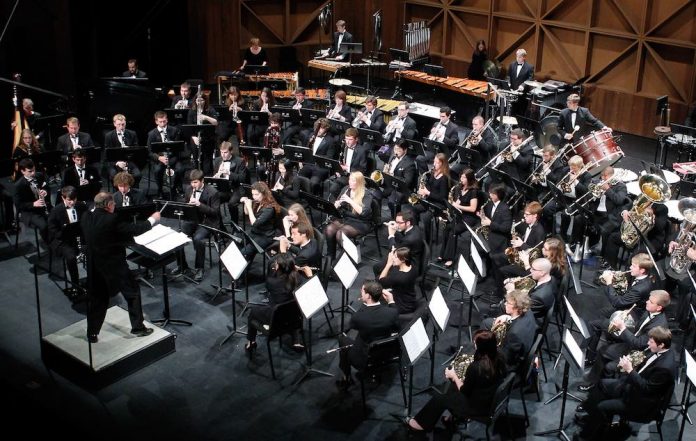 “Believe it or not, a little town in northwest Ohio is one of the liveliest spots for new music in the whole of the United States. Bowling Green students are lucky to have this amazing resource – but so are we all.”

Steven Stucky, 2005 winner of the Pulitzer Prize in Music

Describing new music is a difficult proposition. Writers who choose to use caution, might describe composers and performers with conservative descriptors like modern or contemporary. If given a chance, some will gravitate toward the hyperbolic, describing those same new music artists as revolutionary and groundbreaking.

Innovative, however, is the language of business and marketing. For the MidAmerican Center for Contemporary Music (MACCM), innovation is at the heart of its program— to study, perform, create, and promote new music. And central to that mission is the Bowling Green State University New Music Festival, happening this week (October 17-20) on the campus of BGSU.

“When we say new music, at least in this context, we mean contemporary concert music,” says Marilyn Shrude, Distinguished Artist Professor of Composition at BGSU’s College of Musical Arts. Shrude, one of the founders and directors of MACCM has been with the festival since its inception. “The basic language of music that we composers use is still present in our music but has evolved through time. However, every generation takes basic components, like harmony, rhythm, melody, and form and brings their own thoughts and talents to music. That is what makes music so amazing.”

That language, along with the composers and performers who use it, will be on full display

all week at BGSU. This year’s guest Composer is Aaron Jay Kernis, the 1998 Pulitzer Prize winner in music and a member of the Yale School of Music faculty. Guest ensemble is HUB New Music, a contemporary classical ensemble of flute, clarinet, violin and cello.  The festival will also feature Sha Sha Higby as the Resident Guest Artist. “We started so small,” says Shrude, with a continued sense of wonder. “Now we attract some of the best talent in the world.”

Besides the three featured guests, students and faculty of BGSU will be performing various contemporary works throughout the week, including compositions from Perrysburg resident Samuel Adler, Kristin Kustler of Ann Arbor, Kory Reeder(recent graduate from BGSU) and BGSU faculty Mikel Kuehn (Sylvania) and Shrude (Bowling Green) herself.

Growing with the Genre

“When you see the scope of the festival over the years it is astonishing,” says Shrude. “There are so many groups and composers now. The field of new concert music has really exploded. Of course, there has always been a lot to choose from. Still, with music accessibility forever on the rise, more and more composers and musicians are finding voice and power in creating new concert hall music. The festival has expanded to meet this growth.”

music genre. Besides its distinguished status as a full college within the university, the College of Musical Arts now is host to a unique Doctor of Musical Arts (DMA) degree in Contemporary Music. “The festival has given us a high degree of national and international recognition,” says Shrude. “It gave us the platform to launch our doctoral program.” The DMA was inaugurated in 2006.

Open to the Public

Nothing about the festival is meant to be closed. Most performances are free to the public. The exception is the final festival concert on Saturday, which is seven dollars and is free to BGSU students.

“These are works that deserve our attention,” says Shrude, who has performed (she is a pianist) and had works played across the United States and internationally including Russia, China, Taiwan, Thailand, Japan, Canada and various countries throughout Europe. Her compositions have been highly recognized and Shrude herself was the first woman to receive the Kennedy Center Friedheim Award for Orchestral Music (1984).

“With the vast spectrum of concert music now being written,” say Shrude, “it is a very exciting time to be a part of the festival and music in general. To be here, every year, at a nexus of new music and performance, is a blessing. All composers ask, by the act of composing, is for performers to perform their work and for audiences to listen to it. When we started the festival we hoped a few composers, performers, and listeners would respond. Today, after 39 years, the response to the call for works is still growing. As artists, we can’t ask for anything more.”

Hosted by the College of Musical Arts, BGSU

Being A Veteran on Veteran’s Day