Here are some stereotypes I hear about police officers: cops are alcoholics, cops are power hungry, cops are perverts, cops have a high rate of divorce, cops break the law all the time. Like in all professions, some people just don’t like cops. Here is the one that puzzles most public safety folks: Cops eat doughnuts all the time. That last stereotype in particular is one that makes us scratch our heads. According to MentalFloss.com, the stereotype stems from the 1950s when the only thing open for late night safely officers were all night doughnut shops. Officers often used the parking lots to stop and fill out paperwork. Then there is the weight problem. Many police officers are noticeably overweight (or at least get noticed being overweight). So the parking at all night pastry shops does not help the image.

Why your Neighborhood Officer is so Large

Many people who like to watch television, in particular Law and Order, CSI, Cops, or any other law and law enforcement program have the idea that the police spend their whole day running around, arresting everyone in sight, catching bank robbers, chasing criminals in their vehicles, bashing in the bad guys’ heads, and even helping old ladies across the street. The more negative among us believe that the police spend most of their time picking on innocent people or groups of people that are “not doing anything wrong,” but that topic is for another day. In reality, the average

law enforcement officer here in America spends most of their time sitting, whether at a desk, in a police vehicle, or at the jail.

Unlike the common misconceptions that people see on YouTube and television, the average officer spends most of their day sitting on their duff. Many believe that for the majority of these seemly overweight, old, or apparently lazy officers, running after anything besides the restroom seems completely out of the question. In truth, the excessive sitting leads to drinking caffeinated drinks to stay awake or eating out of boredom. Some days, an officer is forced to drive from one call to the next call, barely having any time to even think which can lead to officers skipping meals, not drinking water or any other kind of fluids, or even eating or drinking too quickly to do their body any good. All of these things are major contributors to the reason your neighborhood man in blue is too big for his or her britches.

As a police officer here in Toledo, I try and do as many things as possible to avoid becoming another overweight statistic. Trust me, it takes effort and conscious thought. One of the main things I try to do is to find ways to get up and get out of the car. Even on the coldest of days in February I force myself out of the car. I find somewhere to walk around at, whether its ten minutes at the park, in a neighborhood talking to people, or even through the local gas station.

Getting up and moving around is the key to keep yourself from becoming lazy, and laziness is what leads to overeating. Even if I can’t find anywhere to stop and walk, I get out of my car to at least stretch out my legs. Besides the fact that the officer is moving their body, another important reason to get out of the car is to keep my back from getting stiff. Back problems (in particular, lower back problems) can become debilitating- the more my back hurts, the more I want to sit, the more I sit, the more I want to eat or drink something unhealthy.

Another important strategy I implement everyday when going to work is I pack my lunch or dinner. This method is best for several reasons. For one, when you pack your own food, you can control exactly what you are eating and how much you are going to eat. I can put all of the healthy food I desire in my lunch, pack exactly how much healthy food I want to eat, and not be stuck in the line of a fast food joint in the middle of my night, searching for some grub.

Police Officers Need Their Sleep, Just not in the Police Car

Another major factor I use to stay healthy while spending a ridiculous amount of time trapped behind the windshield of a police car is to make sure I get enough sleep. Getting the right amount of rest and sleep is actually the biggest and often times the most overlooked factor to this whole equation. When people don’t sleep enough, they tend to be hungry, in particular, they crave carbohydrates. Eating excessive amounts of carbohydrates is what leads to obesity, not just among police officers, but among everyone and anyone.

The biggest problem with this is that many police officers, in particular Toledo Police Officers, tend to make a living working by the hour. Here in Toledo, myself and the rest of the officers are often presented with an opportunity to work overtime or to work as a police officer (mostly security) on top their regular duties to the city. Many of these opportunities are at night. This means that these officers are willing to give up their normal sleep hours in order to make extra money. In theory, this idea sounds great, but is actually very detrimental to the health of police officers.

I have been guilty of giving up my normal sleep hours in order to work an extra shift or two. This mentality leads to many overweight and even obese officers, especially long term. I find that when I get enough sleep, I don’t crave carbohydrates. I also don’t want or need any sort of carbonated drinks such as sodas, which are a huge contributor to weight gain (yes, this includes diet soda too). Also, by getting enough sleep, I find that I am well rest, thinking clearly, not as hungry in general, my body (metabolism) feels better, and not tired during my shift. Remember, sleep is a huge factor in weight loss or weight gain. Getting enough sleep is key to keeping your system functioning the way it is supposed to be and your metabolism up and running.

Don’t Let Sitting Stop you from Being Healthy

Take it from me, an officer who has spent lots of time sitting in a police vehicle, there are ways to fight off the stereotypes that police officers are given, in particular, the stereotypes about them being overweight. Like all things in life, it takes a little extra work, effort, time, and planning in order to do this. I personally have found that the fight is well worth it. I never regret a day that I spend eating healthy, moving around, and getting my sleep. Of course, these methods are very useful for anyone else who finds themselves stuck in a chair, in front of a desk, or staring at a windshield for most of their day. The sooner you implement these ideas, the sooner you will feel better and your body will thank you for it. Don’t let sitting stop you from being healthy.

Keith Bombrys is a 27 year old Toledo native. He has been a police officer here in Toledo for the past five years. Besides serving our community he is also a certified personal trainer and a handyman. 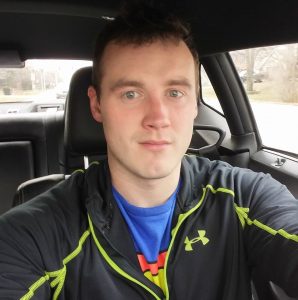 Cleaning Away the Winter