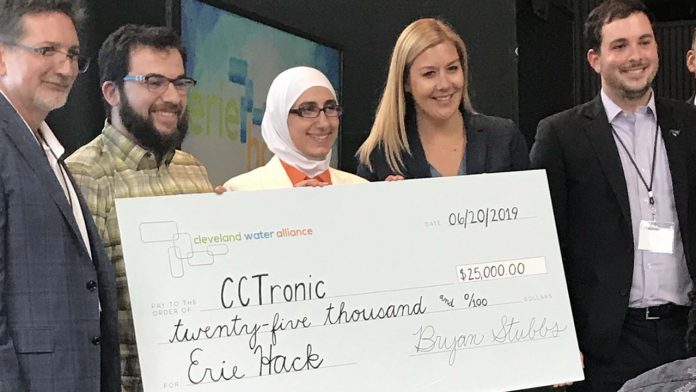 For many of us, clean water is so plentiful and readily available that we rarely, if ever, pause to consider what life would be like without it.

On June 22, 1969, the Cuyahoga River in Cleveland caught fire for the last time. The river, which opens into Lake Erie, has a history of catching fire; thirteen documented times since 1868. Most of us don’t know which is more mind-boggling: a hundred-year history of indiscriminate pollution or the fact that water can actually burn.

For Nida Ammar and Leo Idraikh of CCTronic in Toledo Ohio, water is something they think about a lot. Looking out on a great lake that was, until recently, almost unusable, is a problem they knew they could help solve. Setting their sights on conservation and control, CCTronic took their ideas to the recent Lake Erie Hack and landed $25,000 in development funding to work with farmers and other commercial water users to make our lake clean and safe for generations to come.

Being Part of the Solution

environment. More recently, the 2014 algal bloom that shut down water to all of the Greater Toledo area became a stark reminder that water isn’t as abundant as we might think. “Here we have this amazing resource and we struggle to manage it,” says Ammar. “We have a full lake of freshwater and there are times we can’t use it. It seems infinite but we now know that it isn’t.”

Ammar and Idraikh, Communications Lead and Engineering Lead respectively for CCTronic, know what they are talking about. “When you come from the middle east,” says Idraikh with a smile, “water conservation isn’t something you think might be a good idea. It is a basic necessity of life. Water is precious.”

Living along the western shore of a great lake seemed like a blessing to the couple, their company, and their young family. However, when Idraikh started to really look at the lake’s problems, he began to think of solutions that would keep farmers farming, water available for beautification and landscaping, and above all, a lake that can be a resource for his children and grandchildren. “What you learn when you grow up with water scarcity is that conservation is all about control. Waste is the problem, not everyday use.”

Idraikh and his team have been working in the field of agritech for a couple of years. Their goal is to create a system to help farmers, commercial property owners, golf courses, and other large green space managers control their irrigation. “It sounds, at first glance, like we are just controlling water flow,” explains Ammar. “However, our system is much more than that. Our cHorizon product is a system that is meant to conserve soil and extract nutrients out of irrigation water at the pathways before it gets into the lake.”

The system comprises of three parts: a probe, a valve, and an extraction mesh. Working via the internet, cHorizon is a cloud-based system that collects up to date data on soil components and moisture, helping farmers or property managers make informed decisions about when to irrigate and how much to fertilize. The extraction mesh processes used irrigation water, extracting nutrients (fertilizer) ensuring that the final water returning to the lake is cleaner and safer.

Partnering with the Hack

Launched in 2017, Lake Erie Hack is a program led by the Cleveland Water Alliance. This year’s contest, called Erie Hack 2.0, started in February and worked with local companies and tech innovators from Detroit, Toledo, Erie, Buffalo, and Windsor. CCTronic emerged from the initial competition in Toledo. The goal of the hack is to empower researchers, designers, developers, and technology teams to seek solutions to Lake Erie’s continuing conservation and preservation problems. At stake across the entire competition? One hundred thousand dollars in prize money.

“There were lots of surprises,” says Ammar, who as communication lead headed up the charge in getting their ideas in front of the judges. “This was the first time we had to package our product ideas in a way that would be attractive to investors. Our initial approach was marketing to the end user. For the first time, our tech was being trusted to work. What everyone wanted was to put a face to the function of our design.”

The process of impressing judges wasn’t easy. There were several steps along the way and each time the presentation and the competition got stiffer. “Of course we wanted to win,” says Ammar somewhat sheepishly. “However, there is nothing wrong with second place. What I am so proud of, besides our placement, is that we got a Toledo-based company in the finals. I feel we represented our community very well. It is the first time Toledo has made the finals.”

Besides the second place prize, CCTronic won money at the quarterfinal round, semifinal round, and bagged a $1500 mini challenge. “The mini was a total surprise,” says Ammar. “We won the Climate Resilient Water Infrastructure Apps challenge. Once again, it was another sign of support for what we want to do for our community.”

“The next step for us is to further develop our solution and deploy to more farms,” says Ammar. They currently have a pilot farm running the cHorizon solution. “We will continue to expand to other farms and look for opportunities with seed companies, fertilizer providers, and other agro-business providers.”

Preserving water and conserving that precious resource is at the heart of the CCTronic mission. “I grew up where we rationed ourselves to 23 gallons of water per person a day,” says Ammar earnestly. “It was hard to do all that you have to do with a family on that amount of water: drinking, cooking, washing, cleaning. Living on the shores of Lake Erie, we shouldn’t have to live by those same restrictions. With care and innovative technological solutions, we will enjoy clean and safe water for generations to come.”

Mashed Potatoes for One (Video)